The purpose of the retreat is to cultivate the experience of mindfulness and integrate it in daily life. The program will alternate periods of instruction with Q&A, meditation and body exercises. The aim is to learn to work mindfully with thoughts and emotions, to improve relationships and communication, and to strengthen ethical and global spirituality.

Mindfulness is the key to both authentic happiness and skillful action in the present moment. Mindfulness not only reduces stress; it is also the basis for insight and the direct experience of the nature of one’s mind.

The mindfulness training is an eight day retreat with a specific program each day. Full participation is strongly encouraged. If you cannot attend the full retreat, you may attend the first weekend only.
Program: 1st day 10a-5pm, other days: 9a-5p except final day: 9a-3p with session breaks and 2 hour lunch break.

* Please Note: The registration deadline is October 10, 2014
*In the spirit of open mindfulness, the fee for the retreat program is not preset. Participants are asked to make a donation, or “conscious contribution”.
* Reservations are required to attend: please submit reservations at http://www.kagyu.com
*Accommodations at the monastery are available at our regular fees. 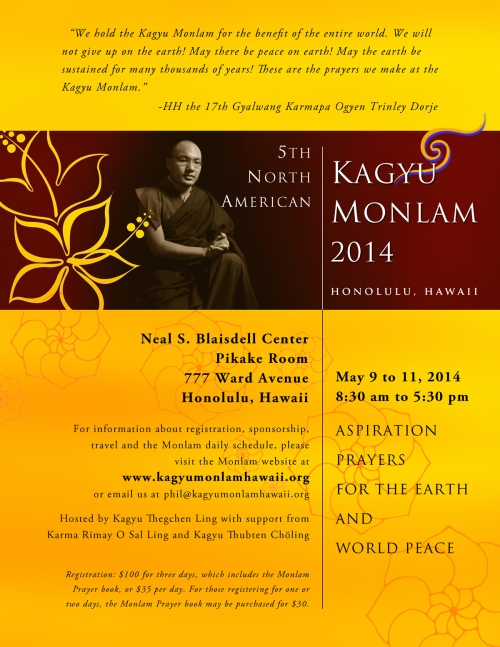 Aspirations Prayers for the Earth and World Peace

The Hawaii Kagyu Centers of Tibetan Buddhism invite you to join us in spreading genuine love and compassion with the offering of aspiration prayers for the earth and world peace. Each day, the Monlam will begin with Mahayana Sojong Vows then continue with the recitation of prayers, Dharma teachings and meditation.

The North American Kagyu Monlam Hawaii continues a tradition began 500 years ago in Tibet when the 7th Karmapa, Chodrak Gyatso, established an annual festival of prayers for world peace and the liberation of all beings from suffering. The Monlam has continued without interruption and in 2010 the first North American Monlam was held in Woodstock, New York.

The Monlam is a way for sentient beings and the earth to join, says His Holiness the 17th Gyalwang Karmapa, the head of the Kagyu lineage of Tibetan Buddhism: “We hold the Kagyu Monlam for the benefit of the entire world. We will not give up on the earth! May there be peace on earth! May the earth be sustained for many thousands of years! These are the prayers we make at the Kagyu Monlam.” 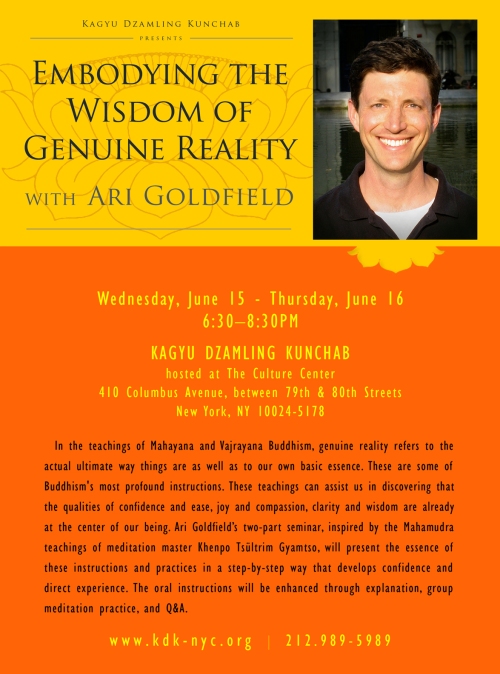 In the teachings of Mahayana and Vajrayana Buddhism, genuine reality refers to the actual ultimate way things are as well as to our own basic essence. These are some of Buddhism’s most profound instructions. These teachings can assist us in discovering that the qualities of confidence and ease, joy and compassion, clarity and wisdom are already at the center of our being. Ari Goldfield’s two-part seminar, inspired by the Mahamudra teachings of meditation master Khenpo Tsültrim Gyamtso, will present the essence of these instructions and practices in a step-by-step way that develops confidence and direct experience. The oral instructions will be enhanced through explanation, group meditation, and Q&A.

Ari Goldfield is a Buddhist teacher and translator in the Karma Kagyu tradition. He had the unique experience of being continuously in the training and service of his own teacher, Khenpo Tsültrim Gyamtso Rinpoche, for eleven years. From 1998 until 2006, he accompanied his teacher on 7 around-the-world teaching tours, received extensive instruction from Rinpoche in Buddhist philosophy, meditation, and teaching methods. In 2006, Khenpo Rinpoche gave him permission to teach publicly throughout the world.

His books, articles, numerous songs of realization, and texts on Buddhist philosophy and meditation include Khenpo Rinpoche’s books Stars of Wisdom, The Sun of Wisdom, and Rinpoche’s Song of the Eight Flashing Lances teaching, which appeared in The Best Buddhist Writing 2007. Besides Khenpo Rinpoche, he has also served as translator for H.H. Karmapa, Tenga Rinpoche and others. 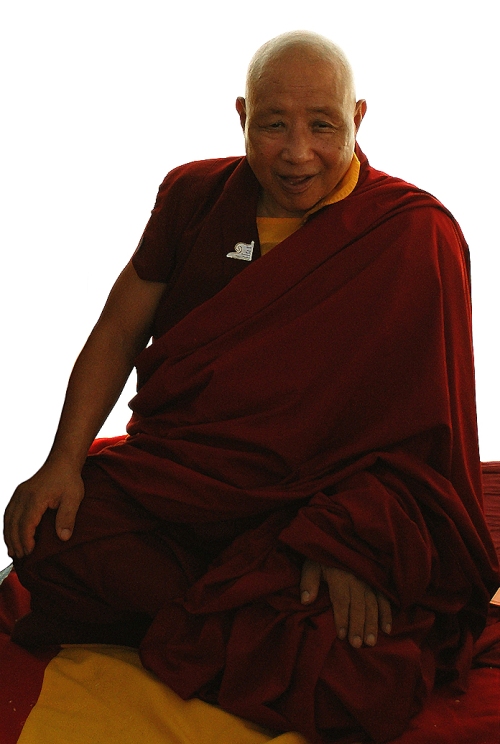 Nyungne Retreat – The Fasting Ritual and Meditation of Thousand-Armed Chenrezig

Venerable Lama Norlha Rinpoche and the KTC Sangha will be participating in a practice retreat of 8 consecutive sets of Nyungne (the Fasting Ritual and Meditation of Thousand-Armed Chenrezig).  The Nyungne practice is a profound kriya tantra meditation and fasting ritual based on loving-kindness and compassion in the form of Thousand-Armed Chenrezig.

The practice involves maintaining strict vows and meditating while reciting mantras and prayers, and performing prostrations and visualizations. Undertaken in sets of two days, the first day includes one vegetarian meal at noon, drinking water throughout the day as needed. The second day is a complete fast performed in noble silence. The Nyungne is renowned as a superior means to purify negative karma and accumulate great merit.

Chenrezig himself declared that completing even one Nyungne prevents rebirth in the lower realms, and the practice of eight consecutive Nyungne leads to birth in Amitabha’s pure land of Dewachen.

Guests are welcome to participate in any or all of the Nyungne sets but please note – it is necessary to arrive at KTC by 8pm the evening before any set as the practice begins as early as 5 am every day throughout the retreat.  The dates for each set are as follows:

We do suggest that guests try to come for the 1st day of any given nyungne set, but if that is not practical, it is still possible to participate any day of the retreat.  For further details for how to participate in this way, and for all guests attending a nyungne for the first time please contact Lama Dechi at dechi@kagyu.com or call her at 845-297-2500 by 4 pm on January 3 (Monday).  It is essential that you contact Lama Dechi by this date as she will be participating in the full retreat and therefore unavailable to help answer questions during most of the retreat itself.

Reservations are required.  Please submit an on-line reservation by January 1, 2011.  This will help us to ensure that the proper number of texts are available as well as to ensure proper meal planning.

The price for each nyungne set includes all meals and accommodations.  Prices per set are:

Teaching on “An Aspiration for the Dharma of the Shangpa Kagyu”

Lama Norlha Rinpoche will teach on An Aspiration for the Dharma of the Shangpa Kagyu. Written by Dorje Chang Kalu Rinpoche, this aspiration prayer to master the path to enlightenment includes teachings that span from the preliminaries, such as the Four Thoughts and Six Paramitas, to advanced practices such as the Five Golden Dharmas, Six Yogas of Naropa, and Mahamudra.

Fees do not include charges for meals or accommodations.  Please arrive 20 minutes early to allow for registration.
click here for more details.

At the conclusion of today’s events, Lama Chodrak of the international Kagyu Monlam organizing committee said that the dates have been set for the next North American Kagyu Monlam.

The five-day event will be conducted from June 22 through 26, 2011, at Thrangu Monastery in Vancouver, Canada. The concluding day of the program is scheduled for June 26, His Holiness Karmapa’s birthday.

To get an advance look at the home of next year’s Monlam, check out: